Spring 2022: I am available for face to face live darts coaching in central London pubs. I don’t coach online, in private houses, or people who are good.

I run darts-based events and can provide darts coaching or lessons in central London pubs. Coaching sessions and events range from the fairly serious to the entirely ludicrous. Pricing depends entirely on requirements, but as a guide, I typically charge £60 for an hour of coaching in a pub in the evening for one or two people, more for events.

If you are interested in finding out more, please email me on bachelorofdarts@gmail.com.

Recent events and clients include: 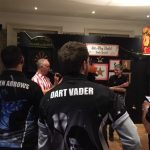 I can also coach actors for broadcast purposes, and was a coach on BBCs Let’s Play Darts for Sport Relief, and the Darts Consultant for the (world’s worst?) movie London Fields. If you are making a programme about darts, I can probably help.

But don’t just take my word for it.

“Justin organised an informal darts competition for a social we were having with an important client. It was a terrific evening and was very well received by everyone. The competition was managed expertly by Justin and included a number of variations to traditional scoring. He also provided helpful tips and anecdotes, which kept the group engaged. We were particularly impressed by how he managed to allow everyone a chance to play, considering that the group numbered more than 20, and there was only one oche!”
HN, Linklaters LLP.

“Justin provided a fantastic evening of darts based fun, interspersed with anecdotes of professional players and darts leagues from up and down the country. His knowledge of the game and his ability to create a relaxed and fun, albeit competitive environment, made for a brilliant evening which will be long remembered.”
Chris D (competition winner!), London.

“I met up with Justin in a pub just near Oxford Street for a darts lesson on one of my trips to London. It was a successful and great coaching session. I particularly liked the way he ran the training and gave me some tips – and I’m looking forward to my next lesson”.
H.A

“Perfect choice of venue, great mix of games – God knows how he kept us all involved. Brilliant. One stag said to me as we stumbled out of a salubrious gentleman’s club in London’s east end… ‘Tell you what mate, that was good, but the darts was much, much better!'”
Matt, London