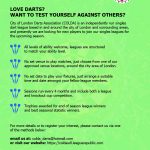 Dart leagues in London are split into those played by teams, and those for individuals.

Although the numbers of teams involved in leagues has dropped considerably in recent years, individual leagues are popular and seemingly fairly healthy. Competitive darts was created as a team game, however, and each league remains unique, with their own formats, regulations and traditions. If nothing else, the night should always end with somebody presenting you with a plate of glutinous food.

Team leagues are typically split into Winter (September to May) and Summer. The standard is hugely variable, and it can be difficult to join a team or a league other than at the beginning of the season. Individual leagues cater for every standard, and allow players to throw a lot more darts.

** MOST OF THE INFORMATION BELOW IS PRE-PANDEMIC **

The Central London darts league (Thursdays) currently has teams playing out of venues in SE1, SW1, WC1, E1 and EC1, so it pretty much does what is says on the tin, covering much of central London.
The Clerkenwell and District Winter darts league (Mondays) runs in the winter in and around Clerkenwell, obviously.
Also on a Monday is the SKADL league, which once had something to do students and South Kensington, but now seems to be played in central London pubs (including a couple of teams based at the Old China Hand).
The Smithfield darts league takes place in and around the City, mainly in EC postcodes.
The Trafalgar dart league (Wednesdays) took its name from Trafalgar Square, as all the teams used to be based nearby. These days things have moved East a little.
If you work for a bank or in insurance, the City Banks and Financial Institutions darts league or London Insurance Office league (LIODA) may be of interest.
The Civil Service darts league doesn’t seem to have a website, but it does exist, and is more commonly known as the Tuesday early league.
From May to September, you could try the City & Holborn summer darts league.
Finally, the Association of Provincial Football Supporters’ Clubs in London has a particularly sociable darts league, and must be the only sporting competition in which Scunthorpe v Rotherham is a top flight fixture.

There are two main individual leagues in central London. One is run under the auspices of the City of London Darts Association (COLDA) and is a fun league with divisions of all levels from beginner to county level, with all games played around the City. The other – the IDL – runs concurrently at multiple venues, including Victoria and Southwark. Both are a great way of playing regular proper darts against opponents of similar standard.