The London Fives or East End board pre-dates the more familiar ‘clock’ board, and can still be found in at least thirty East London pubs (although some swap it with the ‘clock’ board, depending on what day it is and in which league they are playing).

The safest bet to play or watch a game on a Fives board is to head East, then head a bit further East, and then find a pub that has a team in the East London Darts League. That’s because pubs closer to central London – such as those on ‘The Island’ (Isle of Dogs) – have been disappearing fast in the last few years.

One gem remains in Mile End – the Palm Tree, Haverfield Road E3 5BH. It is worth visiting for so many reasons (even the occasionally surly service), including live music, sing-songs, the fact that it is stunning inside and out, and, because, hidden away in the back bar with the boxing photos, is a fives board. The second bar is not always open, so you may need to ask, politely. (On that note, every review of this pub seems to suggest that you shouldn’t ask for a glass of water. Dare you.) 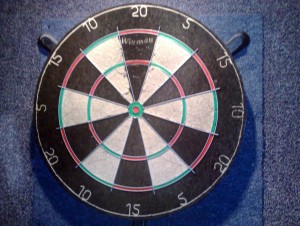 Those doubles are tiny

Other pubs that I’m told are still operating and have a Fives board include: